Safe and eco friendly cleaning products that I use everyday....downside is they do not carry the entire range like they have in US.

"Every litre of non- ecological washing detergent that goes down the drain takes 20,000 litres of water to treat"
quoted from 101 WAYS TO GO GREEN by Natural Health Mag, UK 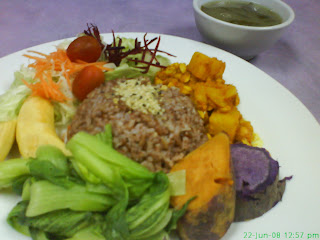 Mum got inspired when she took over the kitchen from aunt today. Like me she will get excited over a colourful healthy plate of rice. Accompanying the set is her new dessert/soup of multi grain rice with seaweed.
Posted by Reese at 10:16 AM No comments: 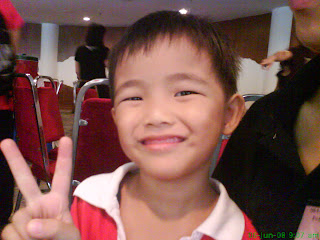 Another proof that with proper nutrition, a vegetarian child can grow up healthier and as normal as any other children.

Da da is a cute and a little curious child that entertained us during the entire Penang health camp earlier this month. He has endless stamina, he is a quick thicker and reacts faster than anyone including adults in many situtations and inspired many other parents to adopt vegetarian diet for their children.
Posted by Reese at 10:07 AM No comments: 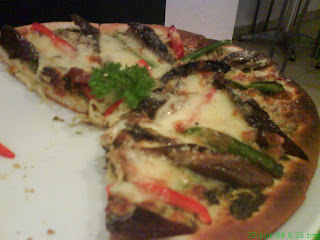 Nice change from the usual funghi pizza I would order ... it has generous amount of mozzarella too. 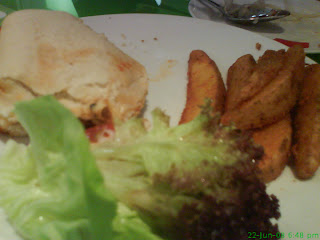 The buns reminded Alan and I on the recent introduce Starbuck's breakfast sandwiches. 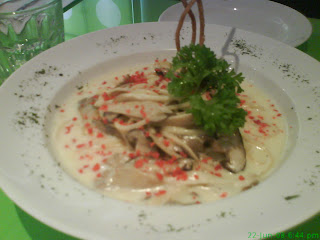 We liked this dish... 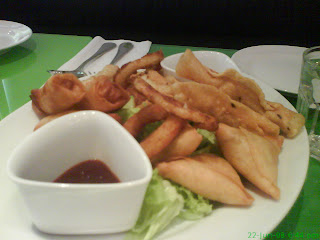 Too oily.....used up our napkins for these


Really, I was supposed to work my ass off a basketball court. Sometime not long ago, I used to hit a basketball court in SS2 with my great pals Alan and Mei Yoong, now it became a rarity as we are caught up with our own busy worlds.

Like I said, we were scheduled to meet up for a game but the rain got better of us. All I managed to do was, walking around the park twice, stood on the balancing poles, stared at a husky, amused by a group of casual dressed scouts practicing their march and pretend I was already sweating.

So Alan and Mei Yoong arrived when the rain emptied the whole park. And we were on our way to try a new vegetarian restaurant in Jaya 33.

We were excited and a friend gave it a thumb ups and a local news paper just covered it a few months ago. Indinine is a fusion vegetarian restaurant that managed to get me excited thus recommended to some of my friends even before I been to that cafe. With me who got bored with conventional Chinese vegetarian find this idea very refreshing.

Perhaps we ordered the wrong food except for the pasta alfredo. Beside the constant oil odour permeating the air, the dishes all spelt too much oil. We ordered Indinine's platter which supposed to have a bit of everything and everything we found were fried. My portobello burger was okay, even the wedges tasted nice, we like the pizza which had brinjal and basils. Yet there was this feeling on oiliness, I had to squeeze lots of oil out before I could eat some of the food.

To give credits, the food is much better than lots of restaurant but we had better, and we are terrified of high temperature treated oil and recycled oil. I would come back but probably for the pasta and preferably as take away.
Posted by Reese at 9:36 AM No comments:

Not exactly a flop but its nothing surprising. Armed with the latest recipe from my recent health camp. I attempt to recreate some of the dishes. One of them is the rojak. To prove how much I want to do this dish right, I even slowly toasted the white sesames and cashew nuts on the wok. Its not like a toasted oven where u can just easily slip in the tray containing the intended toasted material rather its a strenuous work where u have to stand on the heated warm work and stir it non stop. Any mistakes or arm tiredness might result in your hard work going down to drain.

To me its like my early journey towards being a competent cook.

One of my strength as well as my weakness that I like being spontaneous which result in forgetting my pumpkin seeds with my white sesame and cashew nuts, no nice semi ripe papaya cubes, no masam green mangoes and no juicy turnips. All I had was green and red apples, Japanese cucumbers, pineapples and more Japanese cucumbers. Oh and my kasturi limes did not work as well as it should or its masam power was not enough, resulting in me throwing in some apple cider and worst; plum sauce.

No one complained about the rojak. One friend evn said it was nice when half of what she ate was the white sesame and the toasted cashew nuts.

Oh well, the competent cook to be still has a long journey to go.
Posted by Reese at 9:23 AM No comments:

Earlier, bought a jar of rare threat. An organic yogurt tub that set me back rm20 from Cold storage. But it was so smooth, and yummy that it tasted like pure cream melting in my mouth..... 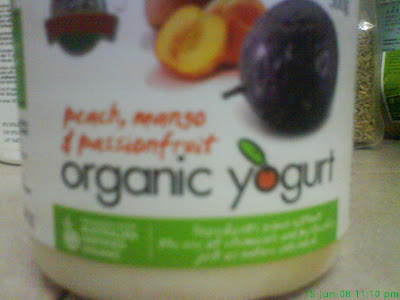 What I read for amusements these days...

Remember after the recent general election many newpapers feature our new breed of local assemblyman/ADUN etc: telling us about them with their biodata and even asking about their contributions to the environment. I tell you, while I applaud them for being honest I was hoping they could say something profound than they don't throw rubbish everywhere or even switching off lights and water when not in used. Even one of a prominent minister wife pledging to only switch off the lights and turn off water when not in used. I mean yes, these simple gestures are often neglected by many people but we have been promoting this since I was like 10? Can we implement or promote something for drastic?

I have high hopes for people who holds and command positions since they have the power to influence. No one except one when I read mentioned they used a bag when they go shopping or recycles and that its because he leaves it to his wife. I know some might be doing it, probably failing to mention it but I just get mad when they fail to use the media to the environment advantage. If the leaders aren't doing it? How are they expect us the rakyat to follow?
Posted by Reese at 6:34 PM No comments:

Toyota sells about 1 million hybrid cars a year and Honda is not far behind with several hundred thousand of it.

While I'm also one of the unhappy driver about the recent fuel hike: I could not applaud that this might also be the time where we learn how to be more green. I receive countless email and messages from friends with tips on how to save fuel usage. For example, some might say buy things in bulk and plan your trips before you go out. To me its a big plus to mother nature as we should already be doing it. The fuel hike just encouraged more people to do so to save money as well with the recent announcement of increase of electricity charges . So more people will turn off fans/air con/tv etc when not in used. The government has already pledged to improve the public transportation system (i know, they have mentioned it many times and yet it still pathetic) and this time the people will ensure that the Government sticks to its promises.

Being green in many other ways will also save money. Usually when we complain its when the issue hits us in the face. Many do not realize there are many issues connecting to the environment that will affect us someway in the future. I am still waiting for the ruling to charge for plastic bags, China has already started, Australian are doing it, Taiwanese will look at you in disbelief if you ask for one and charge you for it and even realistic Hongkies are going it.

I used to dream about buying certain cars. Now I want a hybrid: never mind if I would be joining the many first in Malaysia; never mind if skeptics say I might be experiencing problems, never mind if Honda Civic has the only the hybrid in town (think so heehee), I think its worth it even if it starts from only ME.
Posted by Reese at 6:05 PM No comments:

Getting increasingly bothered with passing out plastic bags to customers. Apparently asking them to bring their own bags seems to fall on deaf ears. Hate giving out plastic containers as well, ran out of eco friendly food containers. Have to remind myself to call my supplier tomorrow.

I know many still need time or more reminders to get into the act...I myself embarrassingly also forgot a few times to bring my eco friendly bag and my personal chopsticks. I will get extremely grumpy for being so forgetful thus my faithful large tote will get bulky each time I go out with books, small items from the pharmacy, water container etc. Now I am planning to add a food container on the go after seeing one customer conveniently using hers. Its looks like disc but you can actually flexed it in and out to save space. Cool.

I am also having a hard time looking for someone to make eco friendly bags for me and the shop too. Hoping I write attractive messages on these bags to make it more fashion friendly thus encouraging people to use it. 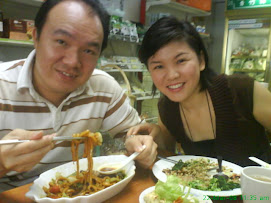